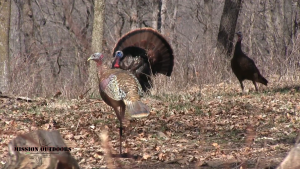 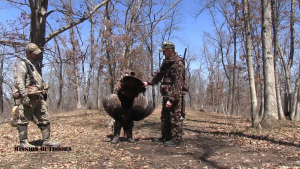 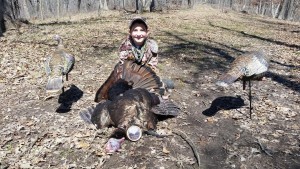 Last year Caleb and myself were invited down to Southern WI to hunt with our good friend Kelly Tollefson, and even though I “choked” as Caleb likes to put it, this year we were invited back but it was Caleb who would be behind the gun instead of me, and unlike myself, he put a nice WI Gobbler on the ground.

Our hunt started early Saturday morning with the sound of many birds sitting in their roosting locations seemingly all around us. Just as the sun was about to rise, the coyotes let loose with a good solid 5 minutes of nonstop howling and yipps which Caleb thought was really cool.

Once the sun came up it really wasn’t long before the turkeys started making their way closer to us. At every note of our calls, we got an immediate reply from multiple birds which told us they were hot. Once we seen them however we realized we may have setup on the wrong side of a thick brushy area as they stayed just out of Caleb’s range, and on the other side of the thick brush.

After trying a couple of other locations, Caleb was able to seal the deal and drop his very first turkey. Needless to say, I do believe he’s officially hooked on turkey hunting!